Grow your small group by prospecting 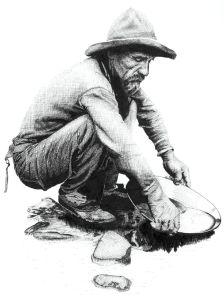 I had a great job during college with the JC Penney company.  For several years I sold men’s clothing on commission, and the big reason for my success was the way I worked my prospect file.  I was religious about having every person who purchased from me fill out a short form with their basic info on it.  It went into my prospect file, and every time we had a sale, I sent out hundreds of letters and postcards.  People came in to see me, not other salespersons, and I watched my income grow.  It paid for my college and seminary courses, and I won some cool prizes when the company had sales contests.  Prospecting (that’s what we called the process of maintaining a file and making contact regularly with prospects) is something I’ve learned is important when it comes to helping Bible study groups grow.

One reason that Bible study groups don’t grow is because the leader of the group isn’t leading his or her members to maintain a prospect file.  In the book The Bonsai Theory of Church Growth, Dr. Ken Hemphill suggests that groups have one prospect for every member.  Do you know how many prospects you have in a file?  Do you have a file?  If not, it’s time to get one!

Church growth experts say that each of us know at least 5 people who are not involved in a small group.  If a group has 10 people, then all together the group knows 50 people who are potential prospects.  All you’d have to do is collect the information about those people (names, addresses, emails, etc) and begin contacting them regularly.  When Tammy and I launched our new group in October 2012, our church provided a list of 49 prospects.  We sent out letters and emails, and even made some phone calls. On our first day, 10 people came.  We continue to work the prospect list, and we are currently adding new prospects to it.

George Barna’s research has indicated that 1/3 of unchurched adults would attend a worship service or small group if they were just invited.  In the example above, if a group of 10 knows 50 prospects, and if 1/3 would attend if invited, then the group has the potential to grow by 16-17 people!

Think about creating a prospect file (electronic or paper) and send out regular invitations to your group’s fellowships, meals, and oh yes, Bible study!  Many prospects will resonate with invitations to parties, and they actually become a part of your group before becoming an official part of your group.  Others will be attracted to a Bible study topic you’re studying. But the bottom line is this:  if you aren’t prospecting on a regular basis and keeping an active prospect file, you may do well to hang onto the people who are currently in your group.  The possibility of growing your group can actually be tied to how aggressive you are in reaching out to prospects.  Start and maintain a prospect file and watch your numbers grow!