Clean Up the Clutter!

As you create your PowerPoint slides,  be mindful not only of the images and words on the slide, but also the amount of space that you leave open. This is often called negative space, whitespace, or clear space.

Whitespace isn’t necessarily white. It refers to the areas of the slide left unused. It could be the empty areas that separate elements from one another or the drama created when an element is set in vast amounts of space….Inexperienced presenters think whitespace is expendable – especially when they need to incorporate unwieldy amounts of contents that’s “too important” to be distilled or simplified despite its cumbersome density. After all, whitespace…carries no information, so what’s the harm in filling it up? The harm is that the audience find these slides difficult to comprehend. Whitespace is as much an element of a slide as titles, bullets, and diagrams. In large part, the use or misuse of whitespace determines a slide’s effectiveness. – from Slide:ology, p.106.

I love what the author or Slide:ology goes on to say: “It’s okay to have clear space – clutter is a failure of design” (p.106).

Here is what a good, clean, de-cluttered slide would look like: 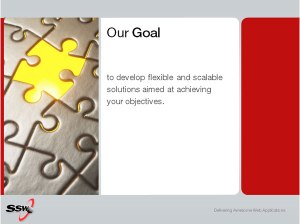 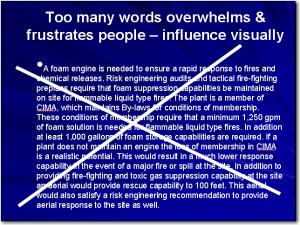